Our daughter came home with Roger in 2014. We don’t really know that much about his history, but were aware that he had been used previously as a breeding stud. We quickly found out that he didn’t like to be handled, nor was he very social. As a result, he was virtually impossible to pair with one of our neutered does. Here’s Roger doing what he does best – eating… 🙂 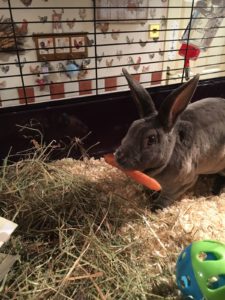 Around June 2015, we noticed that Roger’s water bowl and bottle were both completely drained of water every morning. Thinking that the bottle had a leak, it was replaced. As bunnies like to play with anything they can pick up, we assumed that the water bowl had been tossed into the air also, resulting in it being empty. This could also be validated by his pen being completely soaked – which we originally attributed to the spilt water. We use newspaper to line the floor in some of the pens, as this is a good way to absorb water – a ceramic floor is of course impervious to water, and at this level, we didn’t think it was fair for Roger to have a continuously wet sleeping area.

Over the proceeding weeks, we noticed that the newspaper in the pen was so soiled, it was stuck to the floor, and literally came apart when lifted. Furthermore, his weight had started to drop – this is a clear indicator that something was very wrong, and he became very lethargic as a result. At first, we were puzzled. We knew nothing about diabetes in rabbits, but several of Roger’s symptoms seemed to be very close to family members who suffer with the same disease. Based on our suspicions, we took him to a local vet where he was given a glucose test, followed by several blood tests. The result of the glucose was virtually off the chart in terms of the reading, and an inflamed pancreas and liver were also detected. The vet informed us that he had all the symptoms of diabetes. However, this was extremely rare in rabbits – in fact, it’s almost non-existent according to vets. Here’s a synopsis

Diabetes Mellitus occurs due to a dysfunction of the pancreas. When enough insulin isn’t secreted to control glucose levels, the amount of glucose in the blood rises. Most rabbits with diabetes or diabetes-like symptoms are overweight. ​Therefore, the issue can ​usually be resolved with a corrected diet.

The weight increase however didn’t ring true – Roger was actually losing weight, not gaining it.

Based on the advice we were given, we stopped Roger’s pellets (in case you are wondering, we do not use “Rabbit Muesli” as this encourages selective feeding, makes bunnies put on an inordinate amount of unnecessary weight, and can be the root cause of both digestive (GI Stasis) and dental issues in bunnies) altogether. Essentially, bunnies do not have access to pellets in the wild, therefore, we were advised to feed Roger all kinds of vegetables, and unlimited access to hay (hay is actually 80% of a rabbit’s normal diet). Roger happily munched his way through everything that was placed into his pen, but was still drinking copious amounts of water, and there was no change in his glucose output. One morning when my wife went to clean out his pen, she noticed that his eyes had become cloudy. She said that it looked as though he had suddenly gone blind – literally, overnight. We took Roger to a rabbit specialist who, after running a battery of tests, confirmed that he had in fact entered type 2 diabetes and immediately started him on human Metformin.

Metformin is a type of medicine known as a biguanide. This works to lower the amount of sugar in the blood of people with diabetes. It achieves this by lowering the amount of sugar produced in the liver, and also increasing the sensitivity of muscle cells to insulin.

We took Roger back to the same specialist repeatedly whilst he was given Metformin so that the vet could monitor his progress. Despite our best efforts, reducing the glucose in his bloodstream seemed like a fruitless task. Given the results of the Metformin, the only option we had left was Insulin. This was to be administered via a direct injection into the skin, and was based on a starting figure (in imperial units). We were shown how to administer the Insulin – much the same way as a human would, and quickly became comfortable with the concept. 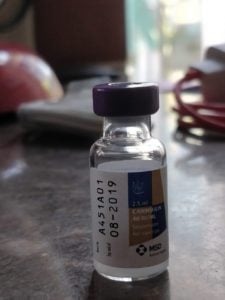 Using the lance to extract a blood sample 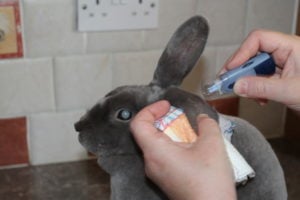 Sampling the blood with the glucose tester 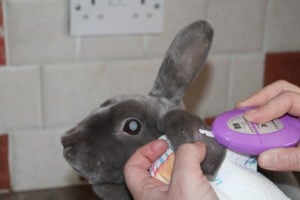 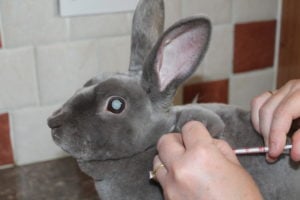 The Insulin had an almost immediate affect in lowering the glucose levels. By now, Roger was living indoors – mainly because it was easier to medicate him this way (he required two injections daily), and also enabled us to monitor him closely. One afternoon, my wife heard commotion coming from the kitchen where his cage was, and went to investigate. She found Roger literally bouncing all around his cage – in fact, in hypoglycaemia shock. Roger was immediately rushed to our local vets and his blood sugar was tested. The vet quickly identified that his sugar level had dropped to below 2.1. Bearing in mind that his blood sugar reading was typically 29.1 (which in itself is far too high), Roger he was placed on a glucose drip. Within minutes, he returned to normal behaviour.

Because of this, we have had to adjust the Insulin accordingly – often needing to “flex” the administration in accordance with the blood test results. In addition, we also keep a stock of instant glucose syrup and tablets in case Roger begins to shock again, as you can see below 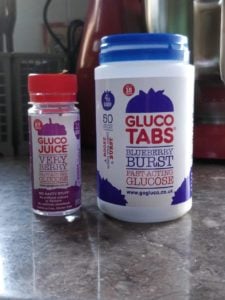 We’ve had to use the glucose syrup a few times so far, and so we can keep an eye on his blood sugar level, we have purchased a glucose monitor (much the same as the human type) as shown below. 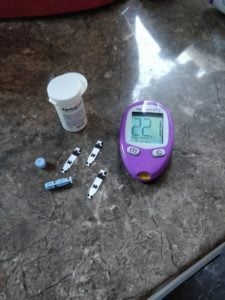 The blood sugar needs to be checked twice a day – always before Insulin is administered so we can determine the right amount of imperial units. If his blood sugar is through the roof, then the dosage needs to be increased. If the opposite, then it is reduced accordingly.

Roger has been through a lot in his life so far, but is loved very much. He’s full of character, and doesn’t let blindness stop him doing anything. 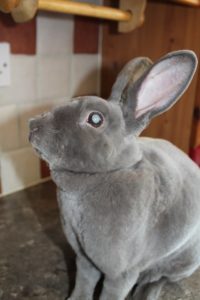 hoppyhope
Hoppyhope is a charity that devotes every spare second of its time to the well-being of rabbits. Founded back in the 1990’s (yes, we’ve been doing it for that long), we originally started out with one hutch, and a friendly chap we named Harvey. Having both been owners of rabbits in our youth, we decided to adopt our first one together as he needed a home. What we didn’t realise is that this would trigger a deep desire we both shared to try and make a difference to the bunny world where we could. For over 20 years, we’ve been adopting bunnies from all walks of life, ranging from broken homes to those who selfishly decided it was simply too much effort to look after their pet. Then we encountered the other side of these antipodean boundaries. The side where neglect and cruelty play a pivotal role in the downfall of these amazing animals. We wanted to make a difference, and however small it may appear to the outside world, we’ve literally been to hell and back caring for sick, injured, or simply unwanted bunnies. Since inception, our private rescue centre has been 100% funded by us, and over time has grown both in size, and population